Well well well, how’s everyone been?

Ready for another episode of our Resident Spotlight with Number 90? This week we’ve got the pleasure of having Elevator East on the waves. It sure was a bit of a challenge to do an interview with a few more people than usual, especially from an editing perspective, but you’re in for a good time!

Elevator East is a London-based party with top-notch systems, global selectors and an ever-revolving location – the lift will change but the spirit stays the same, a moveable mecca of disco, balearic, house, funk, jazz and music from the four corners, sonic purity on boats, in warehouses and upstairs in pubs, as well as rocking Number 90 on the reg! Wondering what the guys have been up to during confinement? Well, let’s do this then!

Get to meet the guys!

90: Alright chaps, quickfire question, 1 song for the rest of your life? No explanation.

TOBY: Rhythm of the Night – Corona

MIKEY: I’m Mikey, I’m 1/3 of Elevator East and I also run the curation at 45turns.com. DJ about as Sibson. Did my literature degree at King’s and I suppose right now I’m trying my best to make and mix and write about music while travelling at the same time. And we used to run parties too, in the old life.

MORGAN: My name is Morgan Edwards, born in Cannes, raised in the vicinity and Toulouse. I moved to London to study War Studies & Philosophy at 18. I started a band called the Alloways, in which I played guitar. Worked in sales after graduating to pay for studio time, records and sunny adventures. Attended & DJ’d a few festivals across Europe before leaving London last September. I then returned to Cannes to escape the big city and was planning on getting a car.

TOBY: I’m Toby, born in Nottingham but raised in the jewel of Berkshire: Slough (of Road Wars fame). I moved to London when I was 18 to study history, quickly uncovering the joys of the city’s nightlife. By day I usually work for a legal publishing company, and by night I assume the alias of bakerlite, trying my very, very best to bring movement on the dancefloor.

MIKEY: Ghost Town (Extended Version) – The Specials
This is not a rare record by any means – you could pick it up for twenty odd quid on discogs. I was given a copy by a family friend of the first pressing of the 12” version around the time I was getting ready to move to London for uni. He bought it the day it came out in 1981, as a young lad. Everyone knows that the main track is a phenomenal groover with a lot of cultural significance, but the two b-sides – Why? and Friday Night, Saturday Morning – are equally special tracks that move something deep inside me. Soundtrack of too many late nights in halls, at intimate afters and all that. Emotional tunes man.

And add Shakara / Lady by Fela Kuti (first US pressing!) to that. Closer of many an Elevator night since the early days. Rest in power Tony Allen.

TOBY: 1st edition copy of David Bowie’s ‘Low’. That ambient side really shows Eno’s otherworldly flare, whilst “Sound and Vision” is for me Bowie at his melancholic best.

90: What new music have you been listening to?

MIKEY: I haven’t been listening to loads of new music but I can say that POST CAPITALISM HYPERWARS PT. 1 by Ikävä Pii is quite the trip. I have however been banging out loads of the Channel One Dub stuff, esp by in-house band The Revolutionaries, and more dub in general (Creation Rebel, Dennis Bovell to name a couple). Tons of Brazilian stuff too. Also this guy called Steve Hiett who brought out some very chilled, tennage-y lo-fi beach balearic surf stuff in the 80s. Had never heard of him before but I believe Be With reissued his album recently. Check out ‘Never Find A Girl’ and tell me you don’t feel like a starry eyed 17-year old kid courting your first girlfriend/boyfriend. .

TOBY: Hame DJ – Sandtrax: Recent release from the always incredible Kalahari Oyster Cult. A1 “On 1”, is a meaty, in your face club ready belter that is bound to wake anyone up from a quarantine-induced slumber. “Zoot” is a trancey, intergalactic little groover that sounds like it originated from somewhere in-between a warehouse in Hackney Wick and Europa. The B side of this record is where shit gets real though. Nightlife is euphoria in its purest auditory expression with dubbed out pads, acid stabs and warped, warming synths stitched together in exquisite fashion. Reminds me of something the late, great Mr. Weatherall would unload to send the crowd west. The final track, Erosion has a more sinister feel, and for me is the ultimate opening track for an imagined marathon set I’ll be doing in a few years’ time. Here’s hoping!
Various – Hexagonal Frequencies (V/A): A compilation album released by BinarySound, no other record released of late has made me long for the club as much as this one. Eleven tracks of driving techno, wobbly house, scintillating electro, screwface breaks and then out of fucking nowhere this funky little groove machine at the end, ‘New Calm’ by Marius. Absolutely outstanding record, and to top things off all funds raised by this record will be donated to La Maison de la Femme, a non-profit working to provide and protect vulnerable women, victims abuse and violence. What’s not to love!

90: How have you been spending time in isolation?

MIKEY: Working on loads of music. You can actually listen to it already – the newest Elevator Edit was premiered recently by Les Yeux Orange, check it out!
Besides that, playing chess, reading, enjoying the sun. First bit of lockdown was Love In The Time of Cholera, now I’m reading Violencia: A New History of Spain. Also trying to learn Portuguese. Not as simple as I’d hoped.

MORGAN: With friends in the South of France, Grasse. Plenty of reading, producing, cooking and the occasional jog or ping pong tournament, oh and a lots of President (local card game).

TOBY: I’ve been working away at my MA in Global History which has been providing me with some much needed structure to otherwise strangely empty days. Outside of that, plenty of cooking, chilling with my two wonderful cats, going on long (one hour I promise) walks with the girlfriend and absolutely dominating manager mode on FIFA 13 (the best in the series I would argue).

90: Have you got any tv show recommendations?

MIKEY: No – I’ve been trying to stay away from TV shows just because there’s all this time now waiting to be filled with useful stuff… a good TV show is the last thing I need! I have been watching a fair few Brazilian films though, and the one I’d recommend to anyone interested in the hybrid mix of cultures, classes, religions and music going on in Bahia in particular is 1962 film O Pagador de Promessas. One of the best things I’ve seen in ages. You can watch it all on here. Also looking out the window has been cool in these times, empty city streets can be quite tranquil.

MORGAN: The Deuce, a HBO production that ended last Christmas starring James Franco and Maggie Gyllenhall. It’s a romanticised depiction of the changes NYC underwent from the 70’s up until the mid 80’s: the advent of pornography and feminism, the rise of a club scene and the gentrification of Time Square.

TOBY: I can give some film recommendations! Recently I’ve watched Margaret, a three-hour epic featuring a smoking hot Mark Ruffalo depicting how a hyper-privileged and precocious New York teen deals with causing a tragic accident.
The most recent Todd Haynes film, Darkwaters is exceptional. This time staring a not-quite-as-hot Mark Ruffalo, it’s a chilling and suspenseful thriller about environmental degradation and corporate corruption that fuels it.
One of Todd Haynes’ earlier films ‘Safe’ is a pretty cool watch too. Julianne Moore is as always fantastic. Haynes definitely has a (I would say justified) fear of industrial chemicals and the impact they have on our health.
If you’re looking for one of those so shit it’s actually pretty good, watch Southland Tales. Featuring an all star cast of The Rock, Justin Timberlake and Sean William Scott, this weird as fuck science fiction comedy post-apocalyptic thriller is about… something.

MORGAN: A lot of cheesy over the top disco, or some ridiculous prog-gone-pop dad rock:
Fafá de Belem – Aconteceu Você
Yes – Owner Of A Lonely Heart

TOBY: UK Bassline. Listen to some of Big Ang’s productions and tell me they don’t slap.

90: Give us your favourite recipe, and what’s the soundtrack to that recipe?

TOBY: Shakshuka! Easy to make, cheap ingredients (you can add a wide variety of meat/veg to it if you want) and delicious at any time of day. Best results occur when accompanied by the sounds of Hall & Oates’ greatest hits.

Well we hope you enjoyed the interview and the mix!

I’m trying to alternate Resident Spotlights with our “A Chit Chat With…” series (you can watch our last one with a Sound Engineer here, for some insider knowledge on how to start sound engineering), to space them out and make them as good as i possibly can! 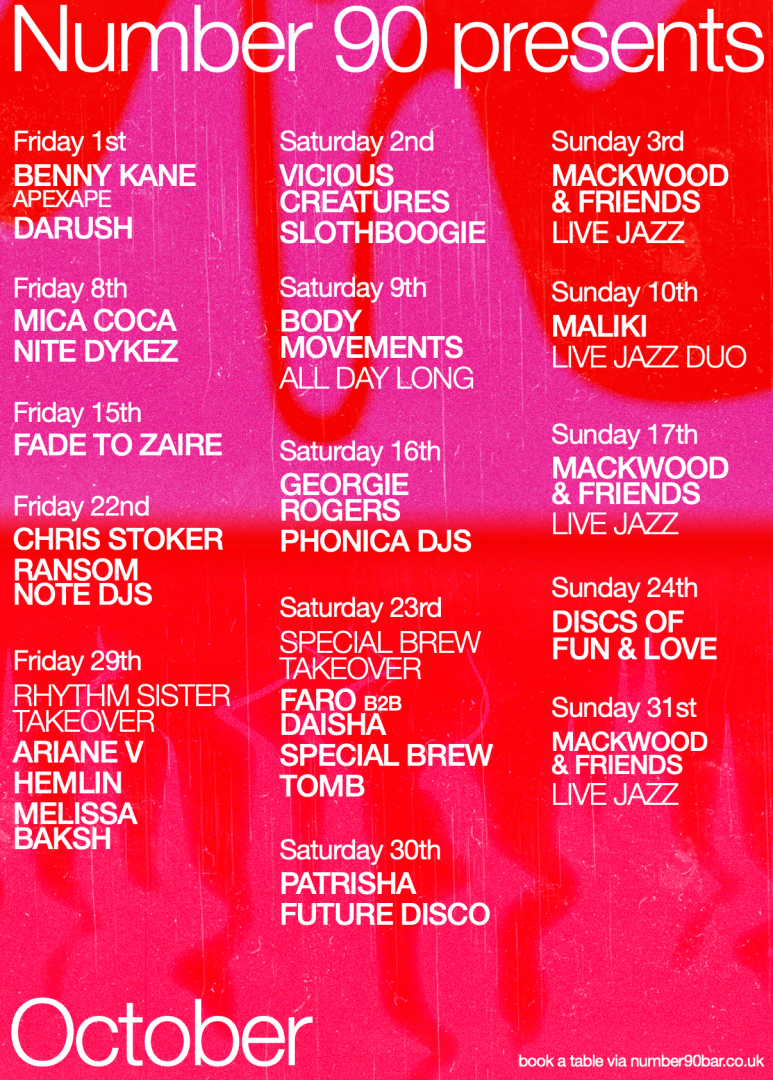 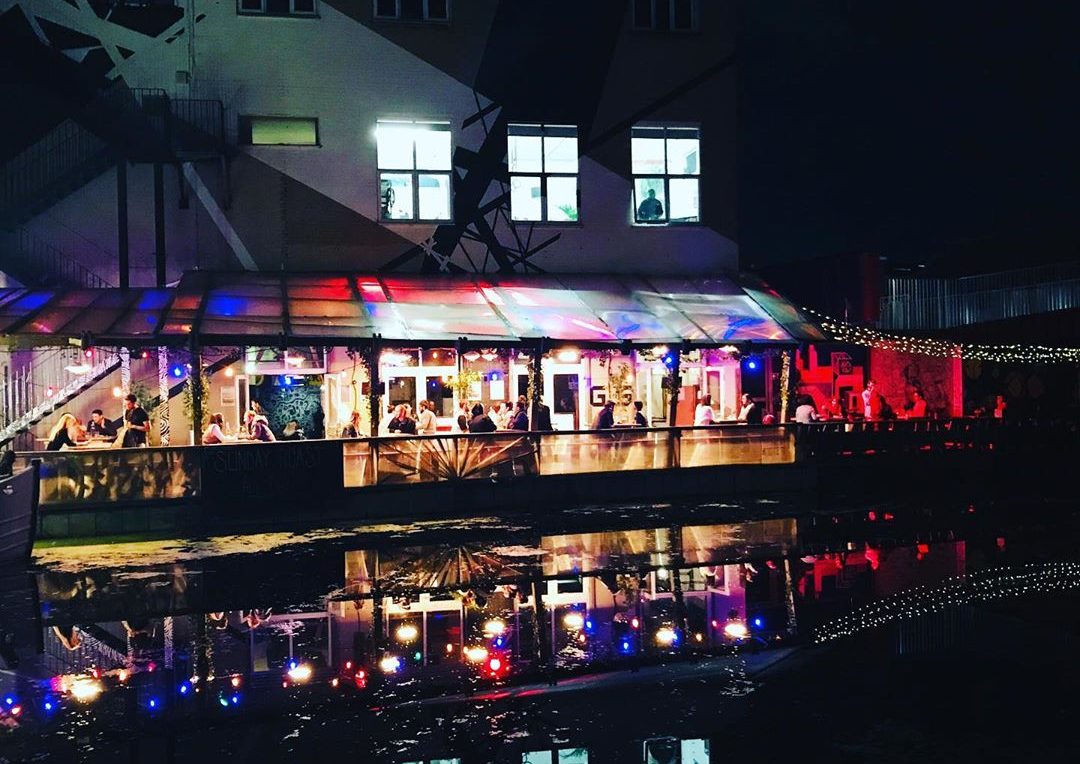